For the first time, I’m going on a cycling vacation alone for a week. My destination is the Cevennes: the area in the south of France with its high, arid plateaus and deep valleys, that looks so tempting on the Michelin map. In five days I cover some 350 kilometers and climb almost 7,500 meters. 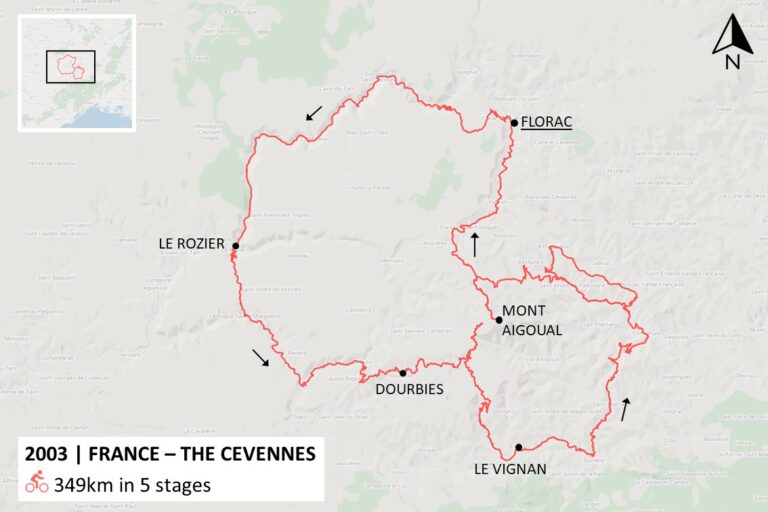 Yesterday I arrived in Florac after 1,070 km driving. I leave the car at the nice camping and start cycling in the area of the river Tarn. From Florac I immediately have to climb steeply to the Causse Mejean (five hairpins, 450 meters, on average 8%). Up this plateau I can see very far. As there is also strong wind here I decide to return to the Tarn as soon as possible. After a magnificent descent – a narrow road with continuously hairpins and with a superior view on the Gorges du Tarn – I quickly arrive at Castelbouc. The houses here are built right next to the cliff. Thereafter I ride 43 kilometers through the gorge. There is so much to see here that I hardly notice the distance.

In Sainte-Enimie I have lunch. I watch a Dutch couple pass on folding bikes, which seems odd in this hilly area. On the saddle again I head on to Saint Chély, which is beautifully situated at the other side of the river. From there I cycle through several tunnels in a row, after which the gorge becomes narrower. There is hardly room for a road here. Near Malène I notice a challenging road going up to the plateau. I hesitate, but no, one steep climb will do for today. So I just continue on my way through the gorge between the high cliffs and rocky peaks. High up the wall I suddenly hear two voices of two men climbing it some 150 meters above me. After another twelve kilometers I arrive at the camping in Le Rozier. The French female boss there is very unkind. Bienvenue a France! 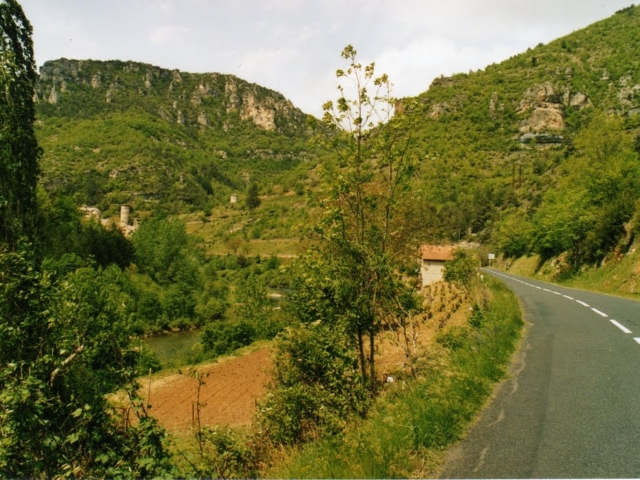 After breakfast in the beautifully located Peyreleau I go south. To get onto the Causse Noir I have to climb 400 meters. After a while I turn right to visit a special rock formation: the Chaos de Montpeiller le Vieux. Having arrived there it appears they charge an 8 euros entrance fee for the last kilometer. In my opinion this is inappropriate – this wonder of nature can go to hell. I return to the main road and descent on a narrow gravel road to La Roque Sainte Marguerite. Sometimes I wonder if I hear wolves cry. Down again in the valley the road follows the meandering Dourbie southwards. Saint Veran is a small village built on a rock some 150 meters higher. Amazing! Cantobre, just a few kilometers further on, is very special as well: also on a rock and hanging above the river. Next I turn left to the Gorges de Trevezel.

I cycle through one of the most beautiful valleys I have ever been. It is a genuine canyon with table mountains on both sides. Very green, very desolate. At the Place Municipal in Trèves I have my lunch accompanied by the ‘village dog’. Then I head onto the south. The height difference with the Col de la Pierre Plantée is 250 meters. Up the ridge I am surprised by the panoramic view on the gorges the Dourbie, which is narrower than where I cycled this morning. In the distance, about 50 meters higher, I can see Dourbies’ large church. Having arrived in the small town, I start searching for the camping. Eventually I find it but it appears to be closed. I can pitch my tent, but there is no water. The small supermarket is closed as well, but the owner lets me in anyway. I cook something and eat it on the unstable bridge over the river, where I have a view of rapids which could have been painted by Bob Ross. An excellent end of an impressive day. 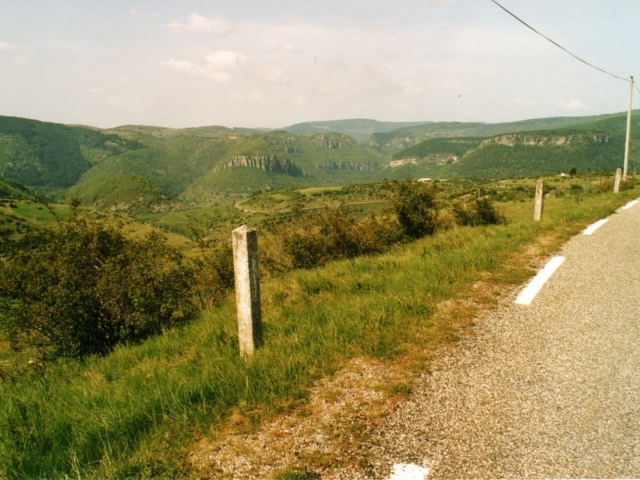 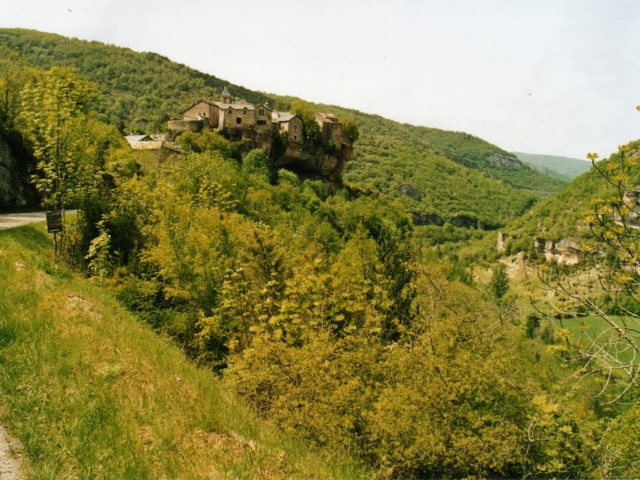 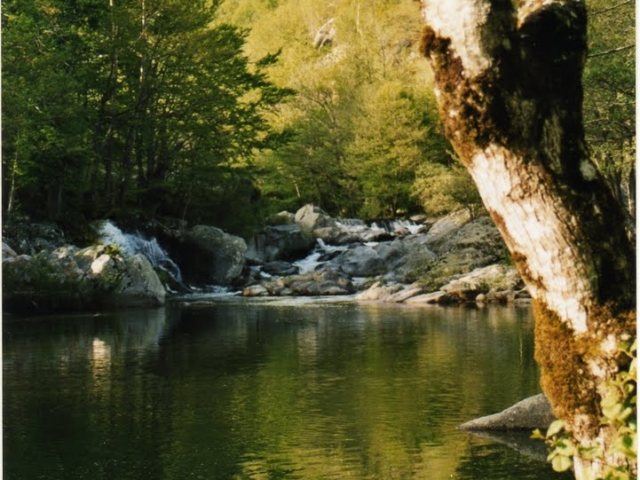 The épicerie is closed on Wednesdays but they let me nevertheless. Behind me lots of people come and buy bread, so I am not that special after all. Or I am, since the friendly owner invites me for a cup of coffee in the bar on the first floor. How nice! He tells that currently only 25 people live in the village. I guess this would mean that there a more buildings than inhabitants, and what about this large church! I get on my bike and continue the ascent through the valley of the Dourbie. Although I am deep down in France, the landscape, the dark clouds and the wind would suit England better.

Today my aim is to reach the summit of the Cévennes: the Mont Aigoual (1,567 m). According to the tourist brochures with annual rainfall of 2,200 mm it is called the “water tower” of France, and infamous for the stormy winds. And on this very day I find out that this is true. After a few kilometers on the ten meters wide road suddenly the wind starts blowing. Bits of clouds are moving rapidly above the trees. What is this? An oncoming driver toots. Further ahead only fog and still a lot of wind. Bizarre. Next a car stops in front of me. The driver explains: ‘C’est très dangereux pour le vélo. Vent forte. Le sommet est invisible.’ Damn. At this moment it is hard not to fall of the bike, what will it be like on top? It seems sad to get blown off a mountain when no one even notices. If I ever end my life early, please let it be somewhere with a nice view.

With only two kilometers left to the top I decide to return. This implies that I descent to the valley of Dourbie, next over the easy Col de Minier (1,264 m) and then through the rain to Le Vigan. This appears to be a typical French town, where oldies play jeu de boules and youth are hanging around looking bored. That is also where I find a nice and fairly empty camping site. The tourist season has yet to start. The guy at the reception asks where I came from today, and I answer ‘Le Mont Aigoual’. ‘Bad choice’ is his reply. Need I say more? I pitch the tent, cook dinner and crawl into the sleeping back hoping to forget this miserable day. 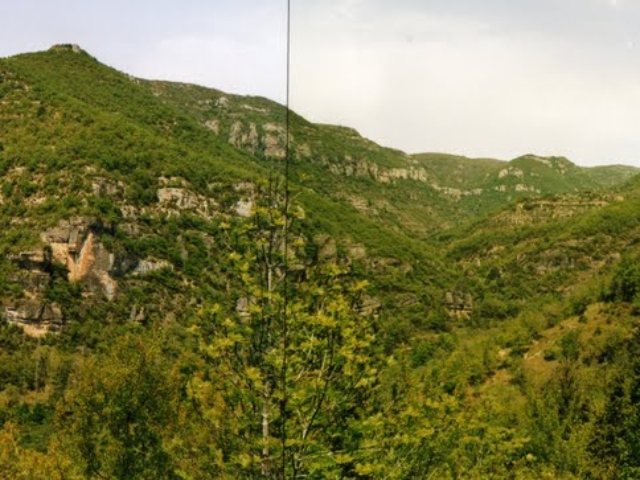 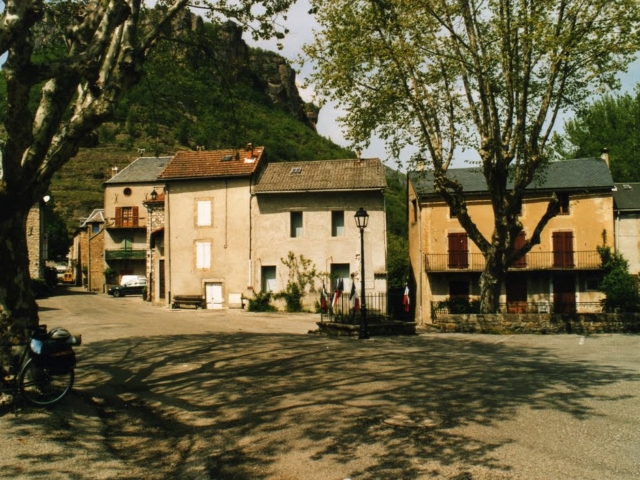 After yesterday’s disappointment I lack the courage to try the Mont Aigoual today, so I decide to approach the mountain via a wide circle. First I head eastwards and then up north. Today’s goal is the Corniche. The first part – the D999 and a local road to Sumène – is quite boring. My legs feel good however, and I get 200 meters higher in no time. From Sumène the D20 meanders to the north along the Rieufort. Saint Martial is a beautiful little town amidst the forested hills. From there I go to the Col de la Triballe op (612 m), and next to an even higher pass in the distance. This is probably the best part of this vacation: relaxed cycling on my own in the sun, on a narrow road with spectacular views. The D152 which leads down from the Col de l’Asclier (905 m) is narrow and badly (or not at all?) maintained. At some spots grass is growing on the tarmac. Cool. It is a shame the descent is over so soon.

Down again I follow a wide road for a while, with fast driving cars and motors. After Saumane a nice ascent follows up the Corniche. This is the famous route leading from Saint Jean du Gard to Florac, constructed during the reign of Louis XIV. The road was constructed on top of the hills instead of down in the valley, allowing his soldiers to move quickly without being attacked. The road made it easier for them to kill all Protestants in the region. I am very hungry. In Saint Roma the owner of the closed restaurant brings me bread with cold meat on the terrace.

Back on the saddle I have mixed feelings about the Corniche. I must admit that the views are magnificent (I can see, for example, the Mont Ventoux far away, and the Mont Aiguoal has also been visible all day). But, the road itself is very wide, almost flat and extremely boring. So I am glad when I reach the highest point (840 m) near Pompidou and find a road going down. In the valley both camping sites near Saint André are closed, so I have to get back in the direction of Saumare. Near Capou I find a cheap camping. Today I climbed almost 1,500 meters. 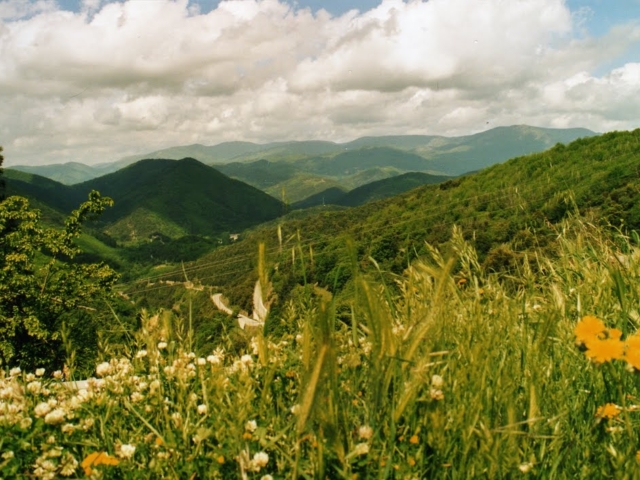 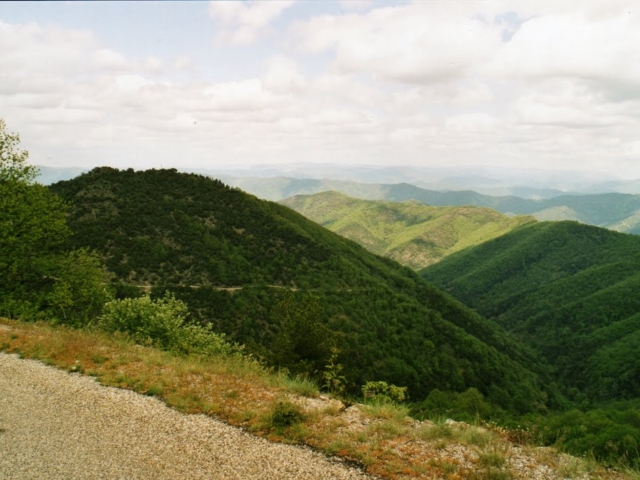 I love getting up late, also when I am on cycling vacations. But today is different: the Mont Aigoual is on the menu. I ascent easily in the direction of Saint Andre de Valborgne and eat a baguette there. Then I turn left up the hill. This D19 is a beautiful road, but also a hard climb. Near the summit I turn left again and head on a very narrow road to the Col Salidés (1,014 m). Up here the view is great: I can see the whole of the north-eastern part of the Cevennes. Next I descent for one kilometer after which I have to climb again for two and a half kilometers at 8%. This valley is full of broom. After having arrived in Cabillac (1,194 m) I take the “highway” to the Mont Aigoual, which I am able to see this time as the weather is excellent. What I see is not what you’d normally call a “summit”; it is just a little bit higher than the rest. Only the first 4 kilometers or so I have to climb at 6 to 7%; the remaining part is easier.

The summit (1,567 m) is packed with coaches and other motorized vehicles – I am the only cyclist. The view is fairly okay, and I believe the brochures state that with a clear sky one is able to see the Alps, the Pyrenees and Marseille, but to be honest I am not impressed at all. So I go down again. After Abrillac I turn right from the wide D18 and go through the Gorges du Tapoul through a beautiful valley, on a narrow road, and cycling at high speed. The road becomes wider again after Rousses, when I reach the river Tarnon – not to be confused with the Tarn in which it ends. After ten kilometers I reach Florac, the final destination of my five-day cycling vacation. I am very satisfied: in these wonderful surroundings there is so much possible with a bike, and I have seen just part of it yet. I will return here for sure! 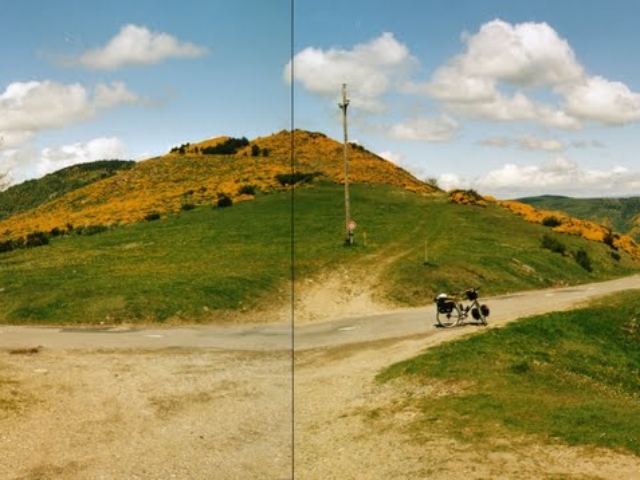 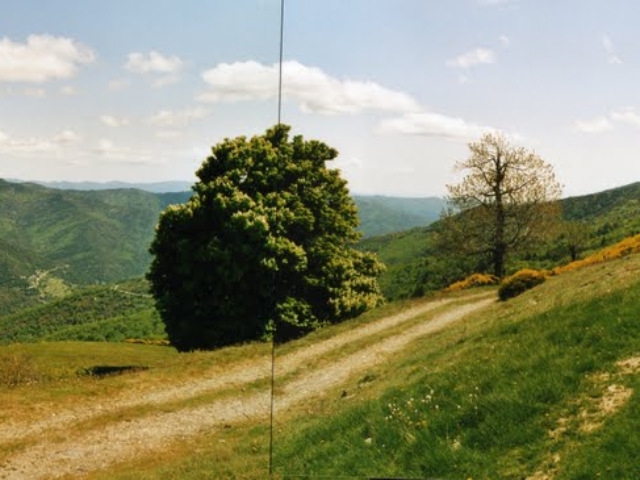