This is the report of my cycling trip around the border of France and Italy, in June 2004. The highlights are some of the big pass roads (Agnel, Bonette) as well as a few less known cols (Fauniera, Sampeyre). I also bump into a statue of Marco Pantani. In six days I travel 315 kilometers and climb 8,700 meters. 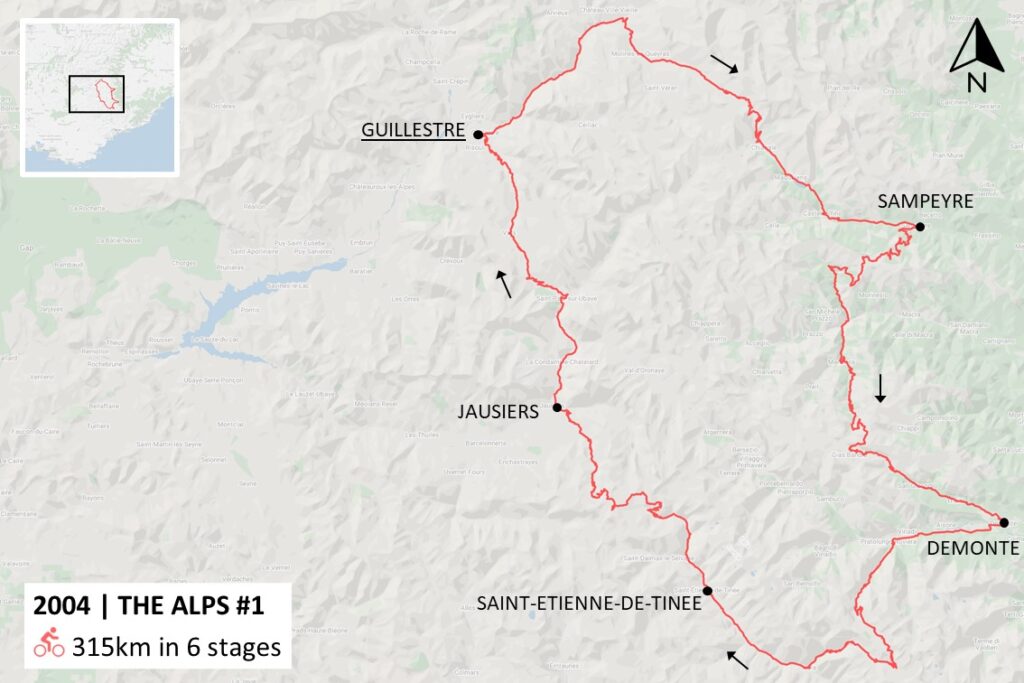 Yesterday I arrived in Guillestre when it was already late afternoon. It was 34 °C when I pitched the tent. Today it is more cloudy and a lot cooler. My chain gets off after just a few hundred meters. What a start! I continue my trip with filthy hands through the gorge to Queyras. The Parc de Queyras is one of those quiet places amidst of the large French ski areas. It is relatively rough and primitive around here. After a while I see a junction and think: Haven’t I been here before (1993)? and turn right. After a few very steep kilometers I get second thoughts, and then I find out that I have taken the dead end road to Ceillac. Silly me. I turn around and get back on the right track.

After Chateau Queyras I turn right on the D205 in the direction of the Col d’Agnel. I drink sports drink and eat some of the Isostar bar. A colleague of mine said to me that this nutrition would surely help me to climb better. But to be honest my stomach starts aching… I can see the highest mountain of the whole area: the Monte Viso (3,841 m). Still twenty kilometers and 1,350 meters climbing to go. The landscape here is panoramic and deserted. But what a tough pass road: after 1,200 meters of climbing the last six kilometers are 8.5% on average. Added to this the Isostar misery: I feel sick and have to throw up. I will never eat that shit again.

I finally arrive at the last few curves. The weather has not been great today, but now it even starts snowing. Completely on my own and feeling sick I cycle here at a height of almost 2,750 m. The descent must be spectacular, but I can’t see much of it. Unfortunately cycling is hardly possible: I can’t use the brakes because of my cold fingers (why did I leave the gloves at home?). This leaves me no choice but to walk for the first few kilometers. I am relieved when I arrive at Sampeyre. I can’t locate the local camping, and I am no fan of camping in the wild when soaked and cold, so I decide to look for a cheap hotel room. An excellent choice, since I can let my clothes dry and watch the World Cup Football lying on my bed. 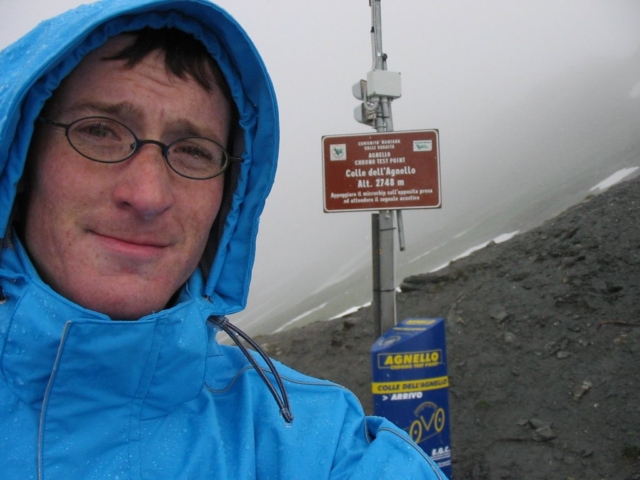 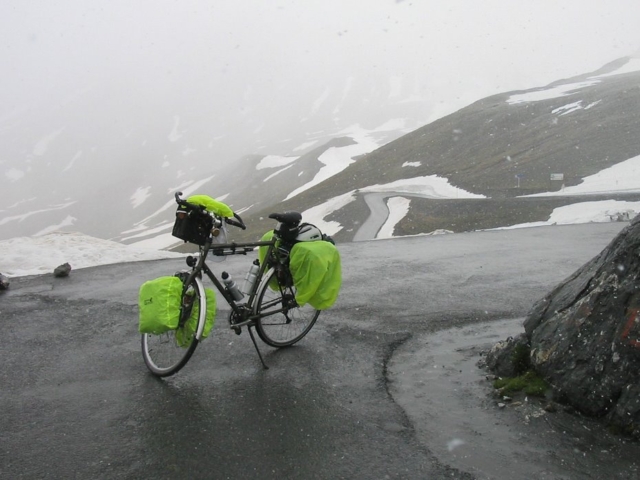 I have not quite recovered from yesterday’s tour. I am sick and lack energy, and am certainly not motivated for a ride. On today’s menu is the steep Colle di Sampeyre: more than fifteen kilometers continuously at 8.6%. To compare: this is 0.5% steeper than the eastern approach of the Stelvio. But that pass road is far more impressive! Most of today’s ascent, starting from Sampeyre, is situated between the dense trees and offers no interesting details. It is only once I reach the summit that I suddenly realize the beauty of the view behind me: the Col d’Agnel next to the mighty Monte Viso.

The southern approach to the pass is more diverse. After having followed the narrow road for a few kilometers, I can choose between either Stroppo or Elva. I opt for the latter. This valley appears to be a gorge. The torrent leaves hardly any room for the narrow, carved road. The tunnels cutting through the succeeding mountain rims do not look very solid. The spectacular descent is steep so I am down in just a few minutes. There I bump into the camping site, which is not open yet. Someone is busy preparing stuff for the tourist season, and lets me take some water in the toilet block (which closes in the evening). This night I am on my own on the campsite till dawn. 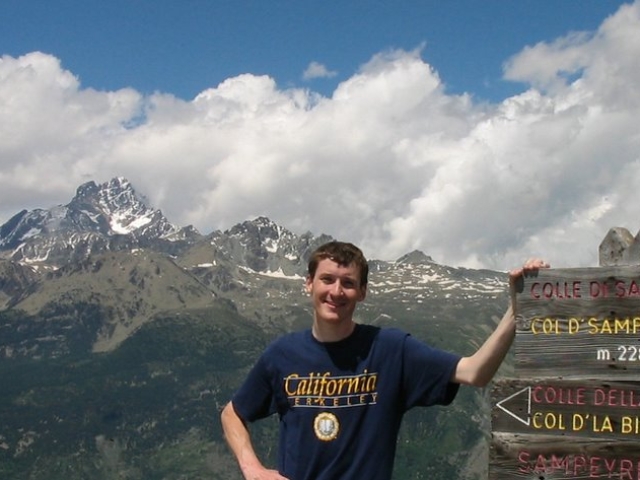 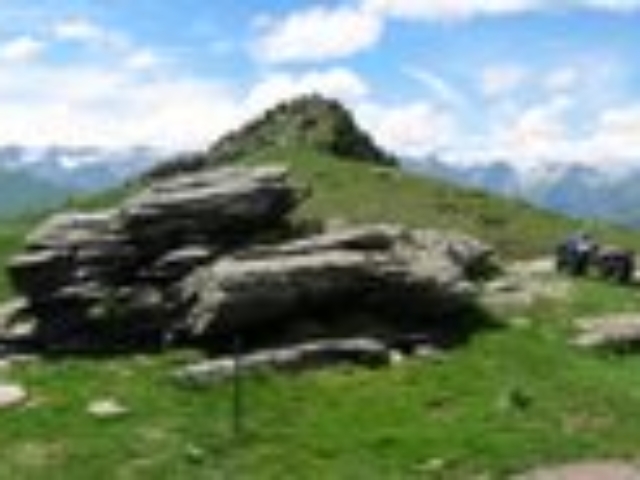 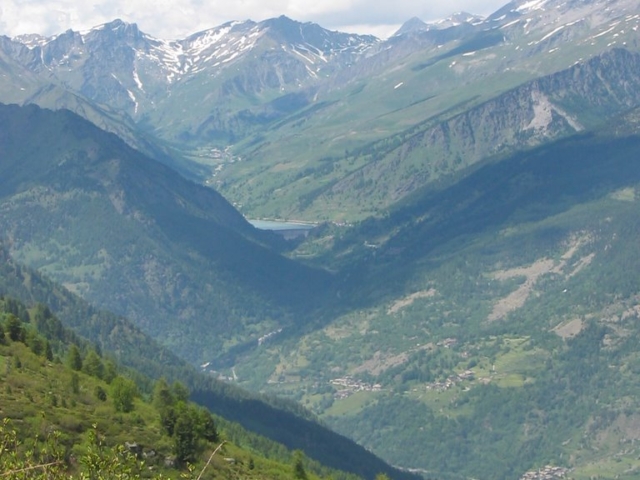 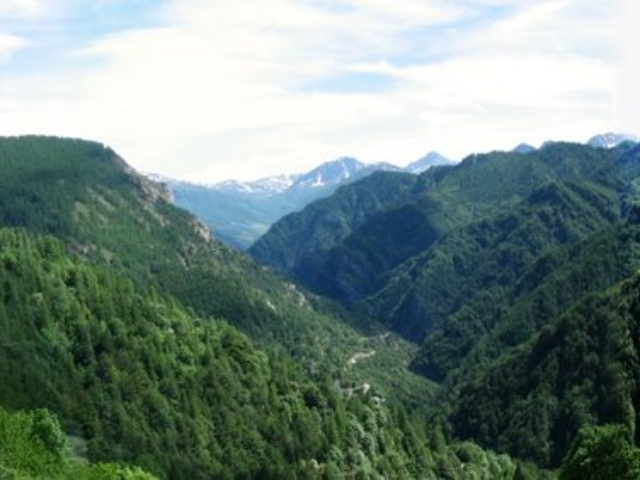 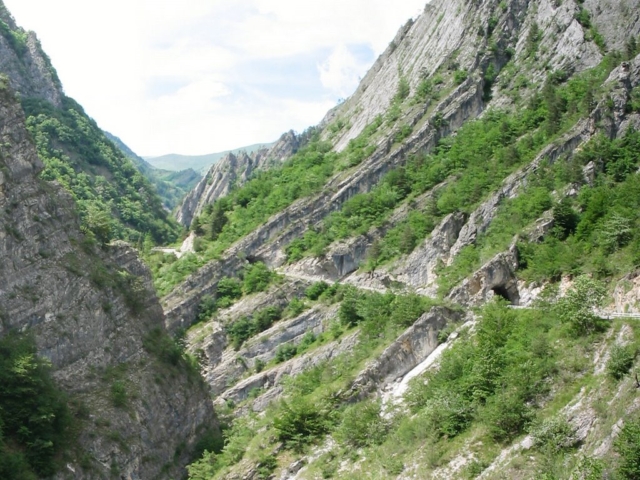 Today’s route was the very reason to come to this area. I became curious when I found out that the unknown pass road to the Colle del Fauniera (or Colle dei Morti), which is not on the Michelin map, had recently been surfaced for the Giro d’Italia. (A truly revolutionary insight to cyclists in Western Europe: the “sacred” Michelin map does not contain all panoramic roads.) So I really needed to come here!

The climb consists of three phases: first I cycle through a rather narrow valley along the Marmora stream and take several curves through an inhabited area. Next follows a long steep part through the widening valley to the Colle d’Esischie (2,370 m), including more than five kilometers at 8.7% on average, with even higher percentages in some hairpins. Thirdly the other side of the Esischie to the Colle del Fauniera, an area that is rocky and rough compared to the green Marmora valley.

When I arrive at Fauniera I am surprised to see a tall statue of Marco Pantani, the road cyclist who recently died after a drugs overdose. I am now on the top of a very long mountain ridge on which several tarmac and gravel roads are situated. Probably these have been engineered long ago when France and Italy were (almost) at war. The (off-road) cycling possibilities must be endless, and I will definitely return here. Suddenly it becomes very cloudy, and I hear thunder coming. I head down on the steep narrow road through the deserted valley and seek shelter. 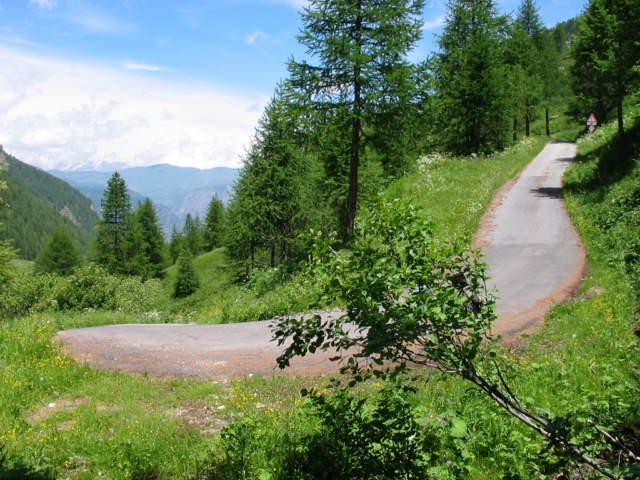 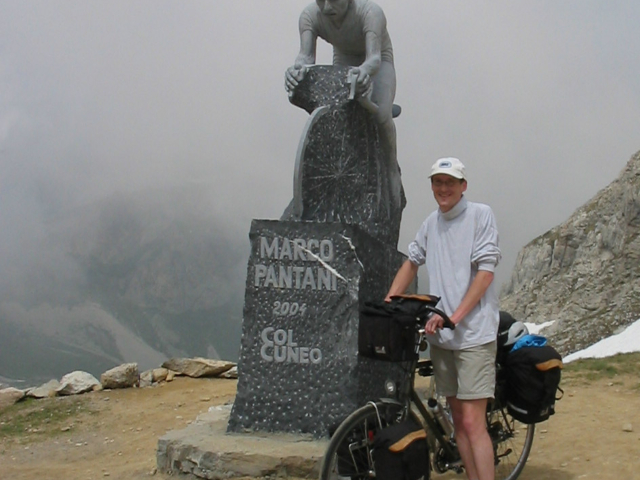 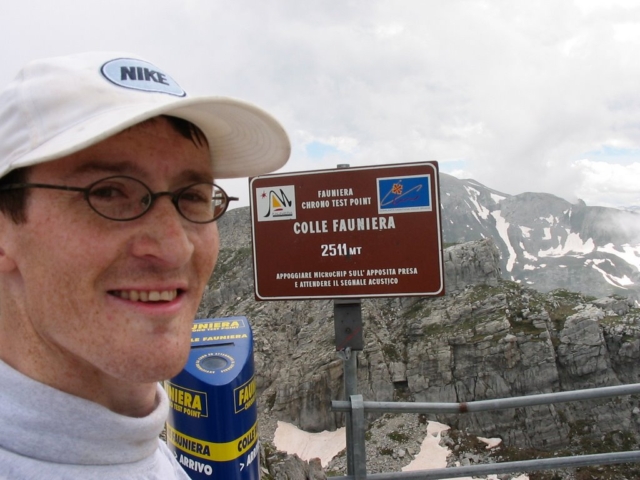 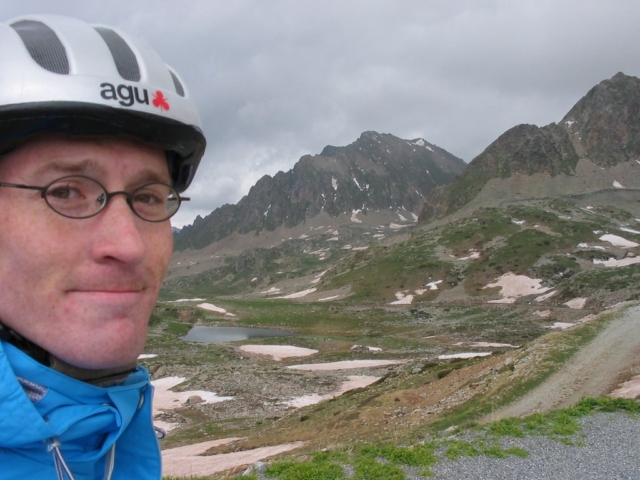 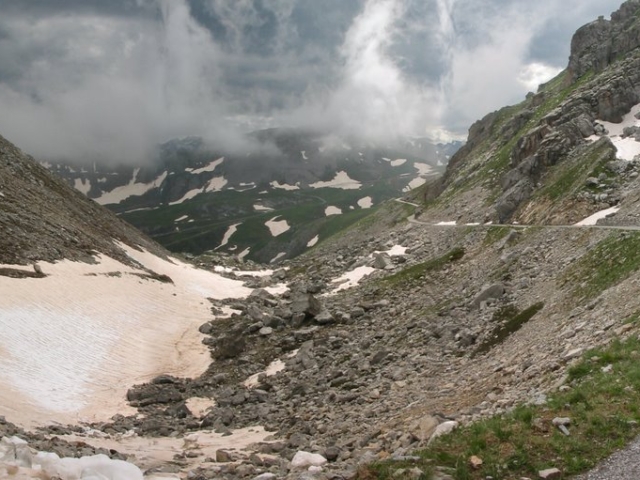 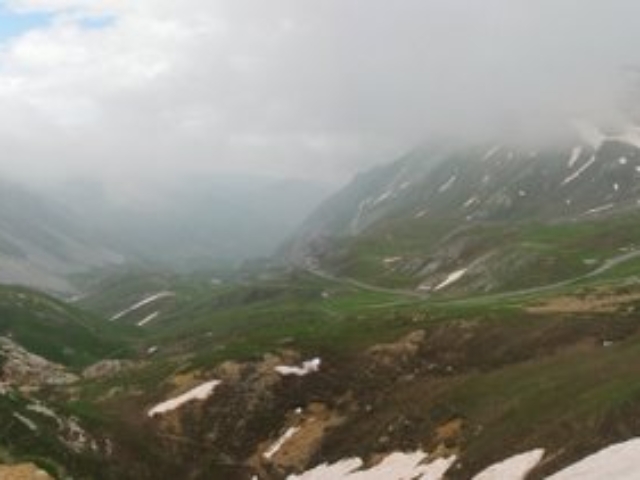 On this drizzling day I want to cycle over the Colle della Lombarda (2,350 m). I have not recovered too well from the Isostar disaster on the flanks of the Agnel. There is no energy in my body, so I can’t strain myself, which is fairly difficult bearing in mind that the first seven kilometers of the pass road are at 8.8%. (The Italian pass roads are steeper than the French and certainly the Swiss cols). Fortunately the second part of the climb is easy. I’m not impressed by the summit itself, so I carry on right away. The descent brings me to Isola 2000, a disgusting ski resort with ugly buildings and lots of ski lifts. There is one advantage, however: the wide road to Isola is perfectly suited for descending fast.

Down I arrive at the road from Nice to the Bonette. From here some fifteen kilometers separate me from Saint Etienne de Tinee. The camping targets outdoor people. The chef de camping gives me, quite premature, a Col de la Bonette-sticker (‘La plus haute route de d’Europe’) for my bicycle. Next to my tent there sits a man in front in a tiny little tent. He appears to be a very gentle Tukker (for non-Dutch people: from the eastern part of the Netherlands) of about fifty years old who was recently been made redundant. He was so furious that he decided to ride the French 100 Cols tour. We have dinner in the nice village. The daily distances and altitude meters he cycles are way beyond mine. I am starting to realize just how relaxed my vacation has been.

When I wake up my neighbor has already left. The Tukker will go for both the Bonette and the Vars today, while I will stick to just one pass. My stomach feels good again – at last. I celebrate this by having baguette with cream cheese and a liter of milk for breakfast. At the start I ride for a couple of kilometers next to a German who started in Nice yesterday and is heading for Frankfurt. It is his first cycling tour in the mountains, and because he is a bit corpulent he has to let go after a while. I hope he will reach the summit.

This is again a road with three sections: first a long and easy approach (5%), next five kilometers of hairpins on the rim (8.4%) followed by ten kilometers at nearly 7% to the pass height. Once the hairpins start, the climb becomes interesting. Just at the moment that I wonder where the road on the rim is leading to, I can see a thin but clear line in the direction of a “sugar mountain” far away: the summit. I really like it here. I am doing so well that I forget that it is only 5 °C and keep cycling in a sleeveless shirt.

From the Col de Restefond a narrow road leads to an even higher summit named the Cime de la Bonette (2,802 m). Unfortunately it is not possible to complete this road by bike, as too much snow and rocks are blocking my way. This means I have to walk for the last part. Up here I have a spectacular view of the brown colored (due to erosion) Alpes Maritimes. The descent on the northern side is completely different, and also steeper. In Jausiers I have some late lunch and turn right to Chatelard where the windy camping is located. 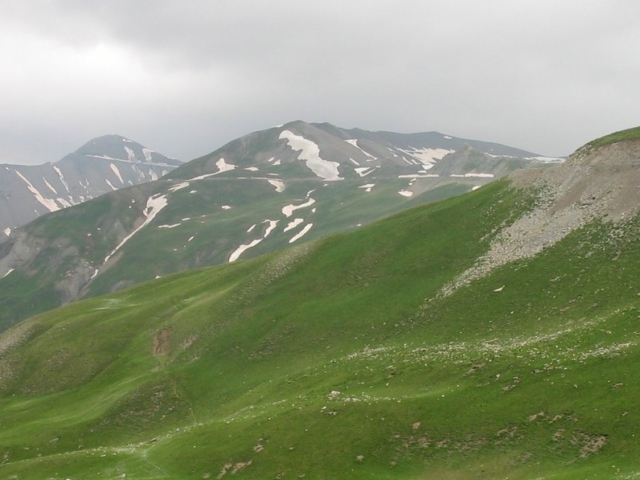 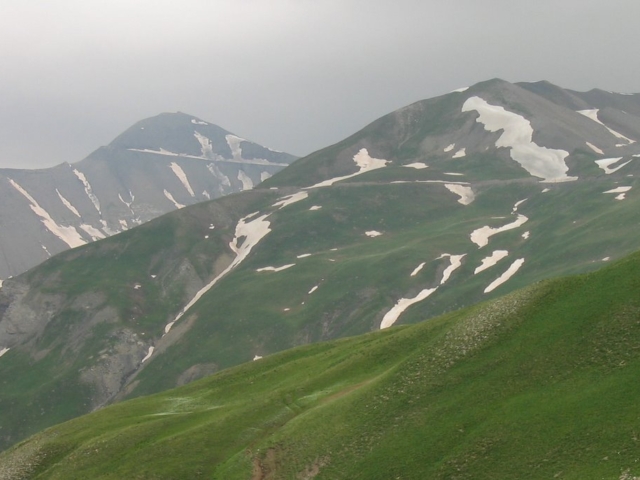 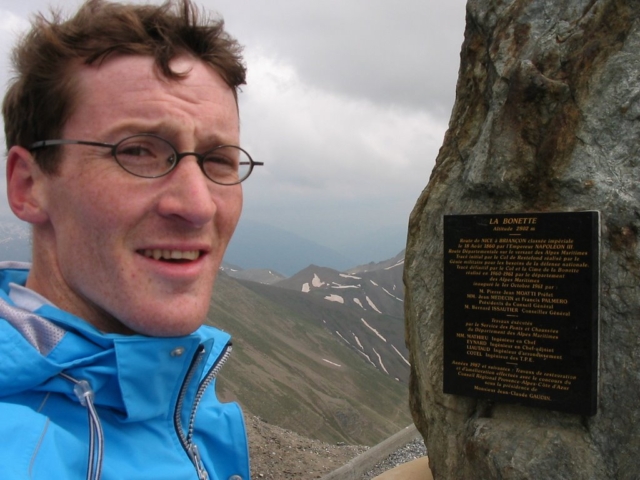 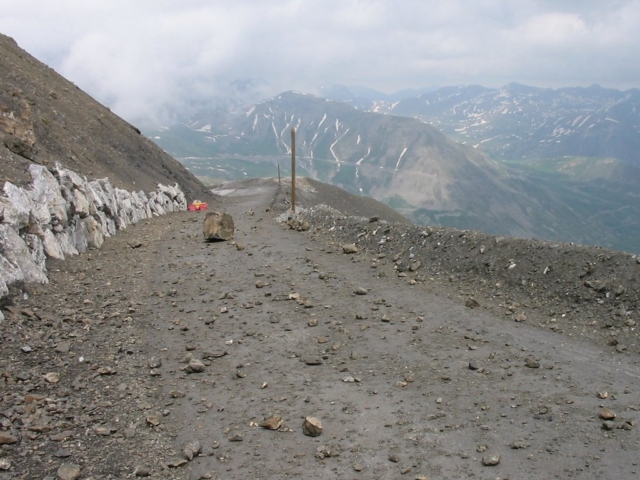 Today I go to the Col de Vars (2,108 m). (In hindsight, I should have tried the partly unpaved Col du Parpaillon. However in 2004 I had not yet heard of this high pass road). This road is moderately beautiful and not too hard, except from one or two bits of 10%. I am on the pass height before I even realize, and there I buy myself a coke. When I descent the view of the Ecrins is marvelous. I arrive the camping in Guillestre and take a shower. Too bad that this vacation is history now – I have to return to The Netherlands. 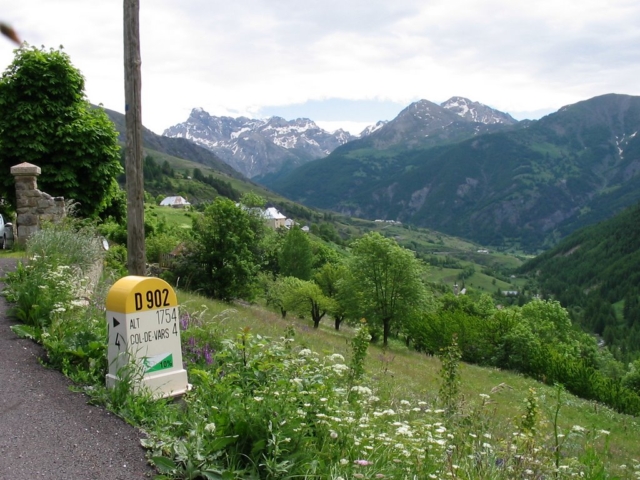 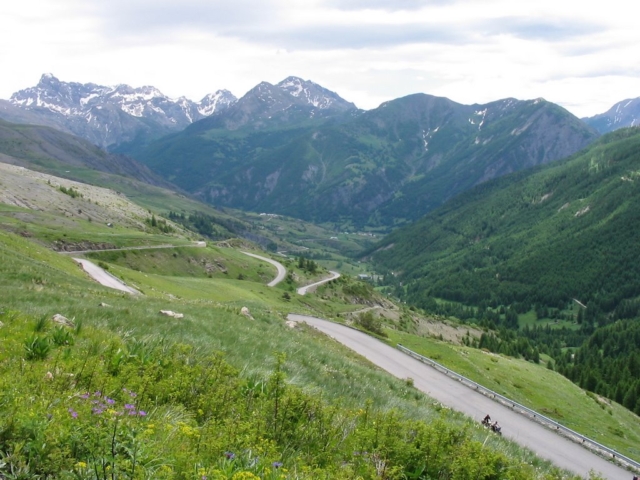