This is the report of my cycling trip in south-east Switzerland and north Italy. With the Gavia as the highest point and the Splügenpass as the most beautiful. The other pass roads were disappointing. Anyway, I can add eight mountain passes to my bucket list. In five days’ time I travel some 400 kilometers and climb 7,600 meters.

The first part from Thusis to Tiefencastel is an easy but not so enjoyable climb on a wide and busy road. Near Filisur the valley splits in two. I turn right and follow the river Albula. The climb to Bergün is demanding at almost 10% during several kilometers. Hereafter the climb gets less steep as the valley opens up. In the distance I can see beautiful mountains. Next follows another steep part: three kilometers at more than 8.5% – this pass road is tricky. The road squeezes itself through the valley, and then, at last I can see the summit. Still seven kilometers to the pass height though, which lies 500 meters higher.

As usual, families and motorbike riders rest from their tremendous efforts on the summit (2,312 m). I continue right away. At this side of the pass the valley is rough, almost gloomy. After a long stretch the road goes down via a series of very steep hairpins. In front of me is the wide Oberengadin valley. The last bit to Pontresina is harder than expected because of the headwind blowing from the Berninapass. I am glad when I arrive at the camping site, some four kilometers past Pontresina near the Morteratsch glacier. 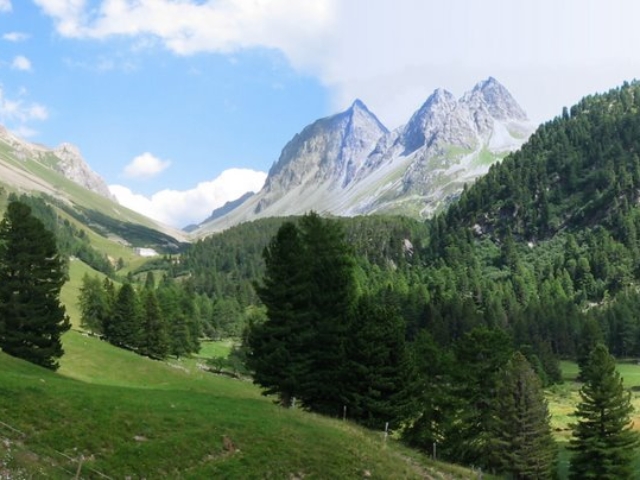 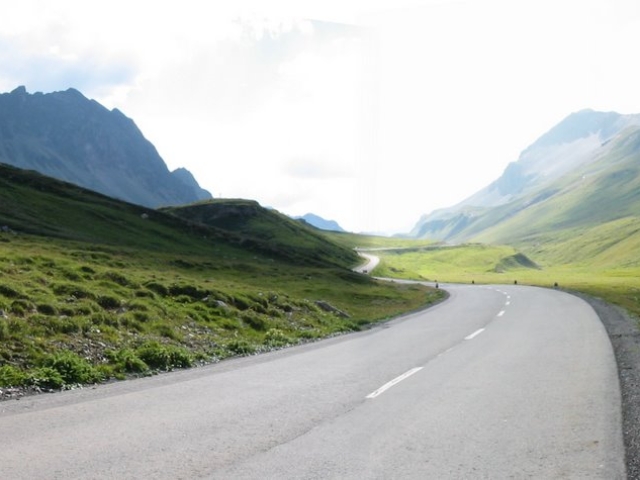 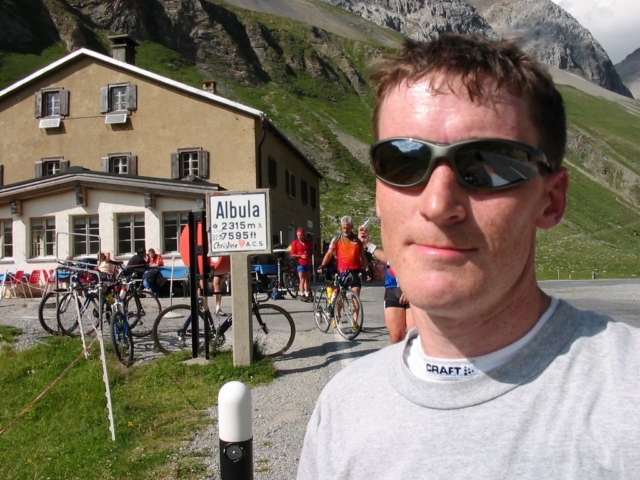 Purely based on the map one could conclude that today’s stage is potentially superb, including four passes above 2,200 m. In practice it is disappointing. Starting with the Berninapass, a boring climb on a quite busy road. The part with the curves right after the summit (2,326 m) is okay, but soon I have to turn left to Livigno, via the Forcola di Livigno (2,315 m) to be precise. These few kilometers climbing at 9% are not so easy, but the highest point is not far away. The view is limited from here as it has started to drizzle.

Partly due to the weather, Livigno looks like a sad place. So I continue quickly to today’s third pass, the Passo d’Eira (2,208 m). I think this road was constructed for ski tourism, as it is wide and has a mild gradient. I order a coke after I reach the top. Then I descent, and go up again, this time some 400 meters to the Passo di Foscagno (2,291 m). The road now becomes busier. I guess that due to the bad weather many day tourists are so bored that they take their cars and drive to tax haven Livigno (where they sell with cheap petrol).

According to the map there should be a camp site south of Bormio. When I arrive there the site appears to be terrible, and I decide to return. I’ve really had it after a full day riding on wide roads through the rain. I take a cheap hotel room and have dinner on my bed. 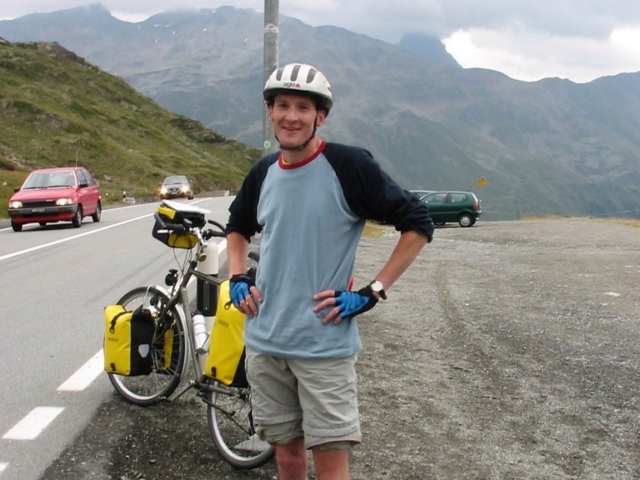 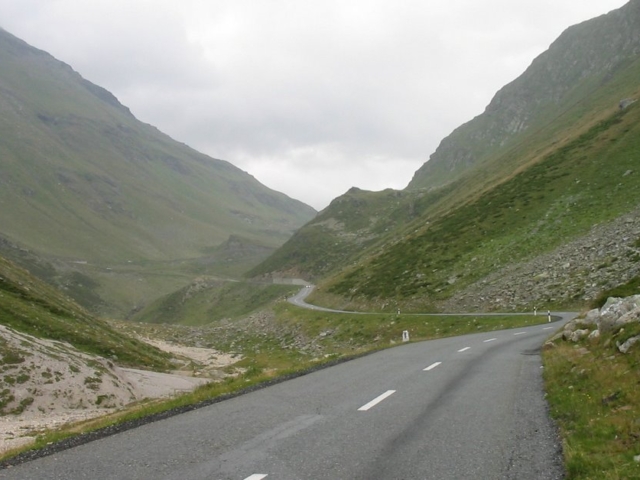 June 5, 1988 was a memorable day. The finish of the Giro d’Italia was in Bormio, and the route to Bormio went over the high Passo di Gavia. During the climb it started snowing. Many participants got into trouble. Many gave up, and some cheated by using vans only to get on their saddle again after the difficult part. Dutch rookie Erik Breukink was the toughest of them all and won this stage. In the final ranking he even became runner up after Andrew Hampsten who won the Giro that year.

Today I travel on this famous Gavia. Unfortunately I go in the less scenic direction. The classic, steep approach is from the south. I notice this: the northern approach is very boring and, apart from a few stretches, not steep at all. I am not able to see much due to the low clouds. On top of the pass road (2,621 m) it is cold. The narrow road is constructed high above the valley. When I descent my brakes have to work hard. The green mountains here at the south side are exceptionally beautiful.

Down in Temù I find the camping soon. This campsite is one of the most lovely I have been. The boss is a nice bearded Italian. Many Dutch come here as well pitching their heavy stormproof cotton tents. A fine place to relax for the remainder of the afternoon. 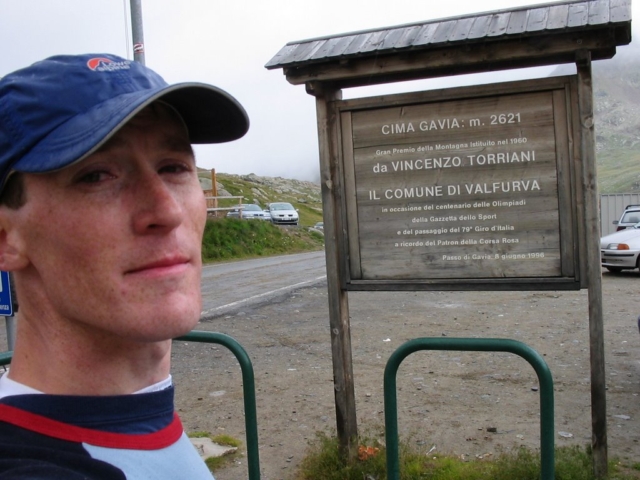 Today I will be cycling the Mortirolo! This is the mountain rim to which four very steep roads come together from different directions, and is often included in the Giro. I climb the Mortirolo from Monno. The distance is eleven kilometers and the gradient almost 8%. Not too hard, though my legs start hurting during the last few kilometers. It is a nicely built road in a not very spectacular environment. On the summit (1,852 m) I cycle on a plateau for a while. At random I take a road to the south, which brings me via many “ups and downs” to the terrible ski resort Passo di Aprica (1,181 m).

I descent some 850 meters to the main valley leading from Lago di Como all the way to Bormio. Today’s destination lies at the famous lake. But before I will arrive there I still have to cycle for another 65 kilometers. And this is no fun: the road is very busy and people tend to drive fast here. Although all drivers keep a close eye on cyclists, like anywhere else in the Alps, the idea of lorries overtaking me at a speed difference of 80 km/h horrifies me. At Sondrio I cannot resist the McDonalds. After 130 kilometers I finally arrive at the camp site in Domaso. Before pitching the tent, I buy myself a cold beer first. 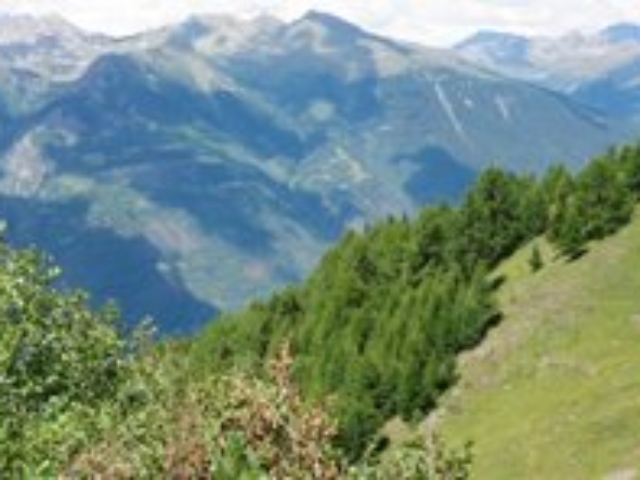 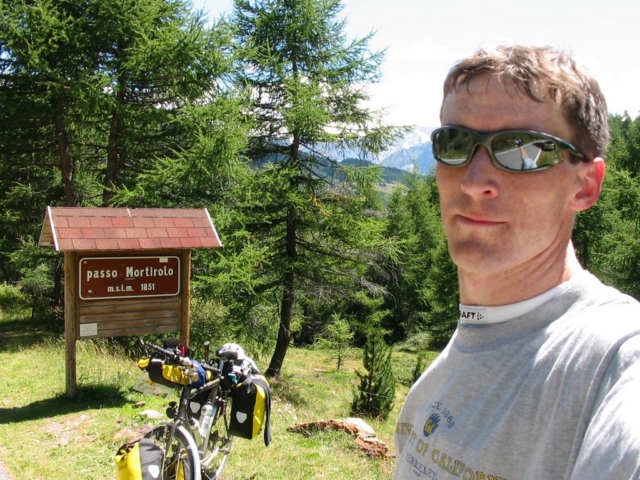 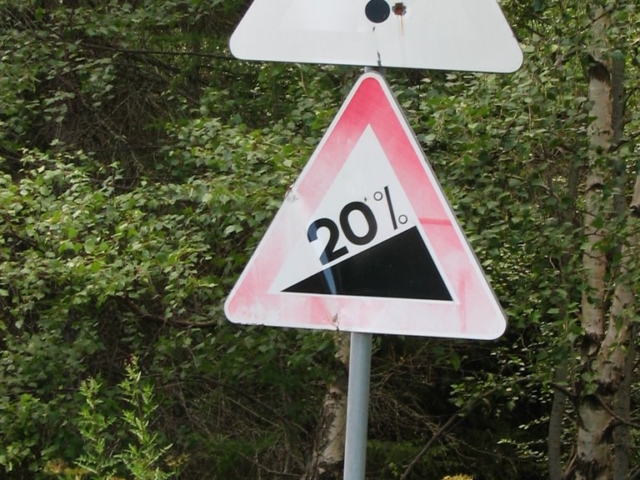 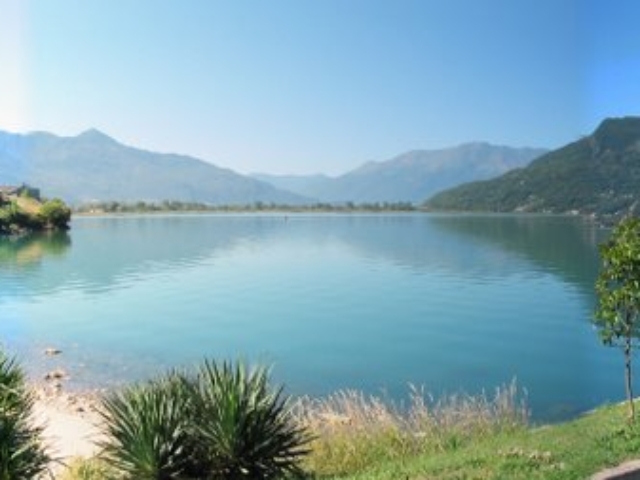 The southern approach of the Splügenpass is just perfect. First I can warm up a little cycling along the beautiful Lago di Mezzola to Chiavenna (333 m). In this busy town I buy some food for today. Next follows a stretch of 10 kilometers at 6-7% on average, which is not too hard. But then: ouch! In front of me are eight kilometers at an average gradient of 8.5%. That is tough. The positive news is that the road is very diverse: sometimes it is carved out of the rocks resulting in weird tunnels and very sharp turns. The drivers of sports cars coming from behind hardly find it difficult to see me in time.

After the steep part, eight easy kilometers remain to the pass height. There is a ski area on the right of me (Mademiso) but I am glad not to see any of it. So far, the landscape has been a bit of a bummer, but up here it is really beautiful. On the pass height (2,113 m) I say ‘Hi!’ to the Swiss border guard and then I am back in Switzerland. The north side of the Splügenpass is quite boring. After a series of hairpins I arrive in the main valley soon.

From Splügen the road descents along the Hinterrhein. The Via Mala, the old trade route through the narrow gorge, makes this part of today’s stage very interesting. It is an appropriate end to conclude cycling holiday with its best climb on the last day. 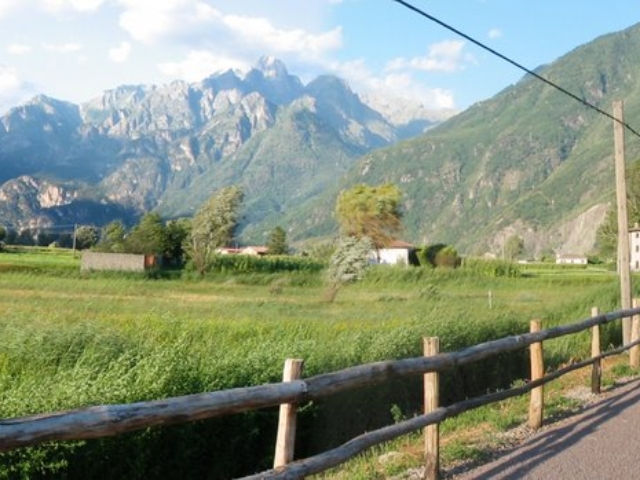 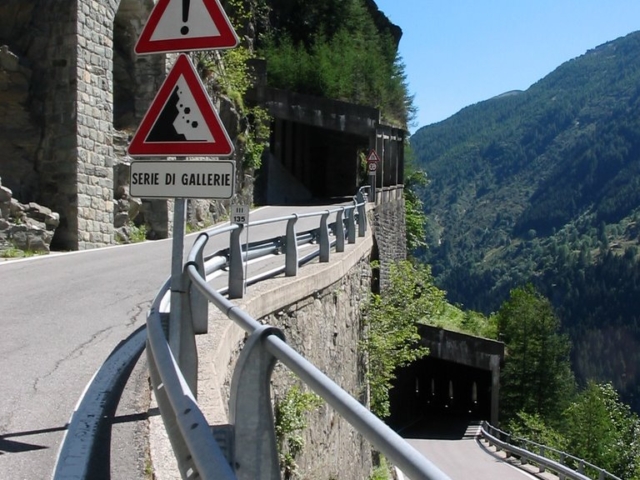 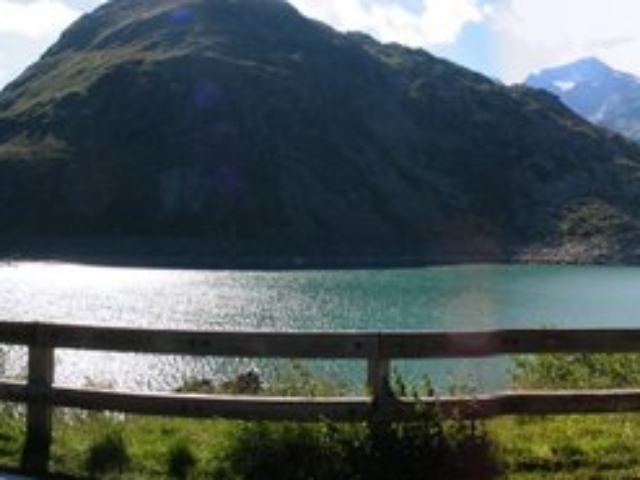 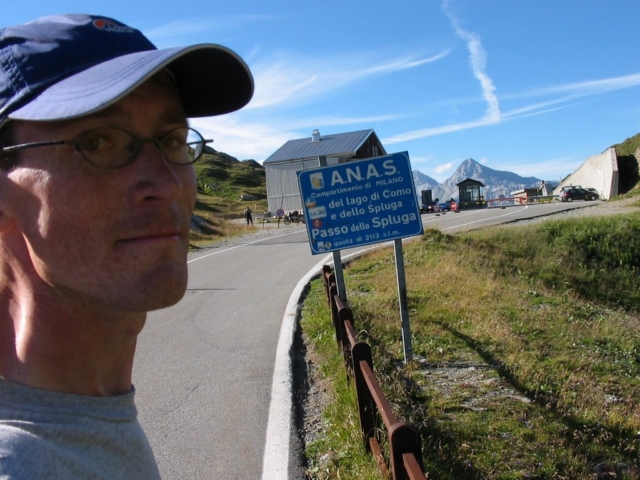 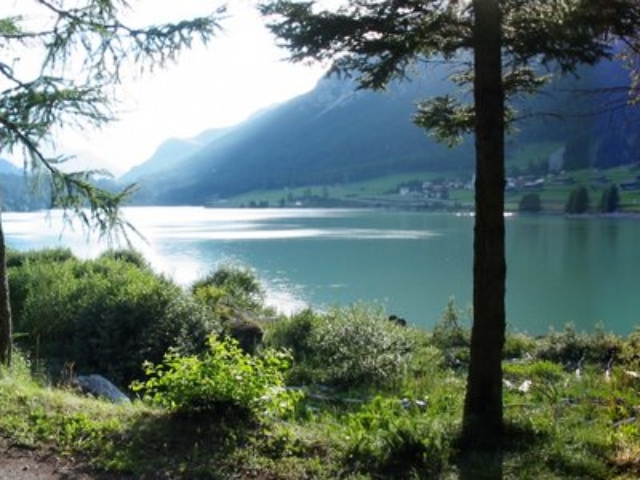